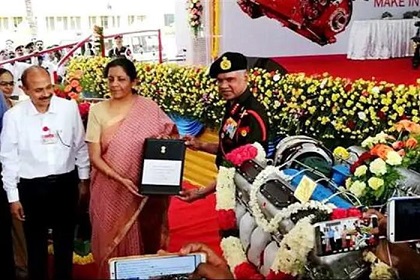 Indigenously built high-power multi-fuel engines V-46-6 and V92S2 were delivered to Indian Army for the first time under Make in India. These engines were manufactured by Engine Factory Avadi (EFA), a unit of Ordnance Factory Board (OFB).

The V46-6 tank engine is also high power diesel engines with 780 HP and it is fitted in T-72 Main Battle Tank (Ajeya Tank). They are manufactured with 100% Made in India parts.

The indigenisation of two of three types of tanks used by Indian Army has made it battle-ready. It has resulted in savings for exchequer for each engine cost to the tune of Rs. 33 lakh for T-90 engine and Rs. 9.75 lakh for the T-72 engine.

It also exhibits the self-reliance of ordnance factories board (OFB) in manufacturing these engines in India without any import support.