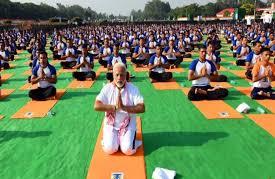 The celebration of International Yoga Day in India

The Prime Minister participated in yoga celebrations at Rajpath in New Delhi in 2015, the Capitol Complex in Chandigarh in 2016, and the Ramabai Ambedkar Sabha Sthal in Lucknow in 2017.

History of the International Yoga Day

It is considered as the new global narrative and soft power of India. It is celebrated on June, 21 every year.

The date was recommended by Narendra Modi since it marks the longest day in the northern hemisphere.

Adopted in December 2015 in New York, the draft resolution had a record-breaking 177 co-sponsors, including the US and China.

International Yoga Day celebration on 21st June linked to So...