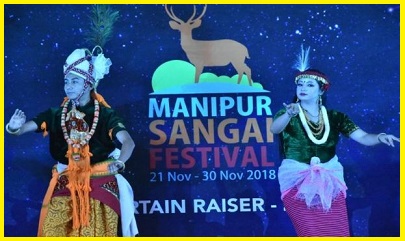 The annual Manipur Sangai Festival is the grandest festival of state named after state animal, Sangai, the critically endangered brow-antlered deer found only in Manipur.

The Manipur Sangai Festival aims to promote Manipur as a world-class tourism destination. It was inaugurated by Union Minister of Defence Nirmala Sitharaman at Hapta Kangjeibung, Imphal East district on 21st November 2018.

Manipur Sangai Festival is an annual event that was started in 2010 and has grown over years into a big platform for Manipur to showcase its rich tradition and culture to the world.

Indigenous sports such as martial arts- Thang Ta (a combination Spear and Sword skills), Mukna Kangjei (a game that combines hockey and wrestling), Yubi-Lakpi (game played with greased coconut like rugby) and Sagol Kangjei- Modern Polo (believed to have evolved in Manipur) will be also showcased festival.

Sangai Deer is a (Rucervus eldii) also called the Dancing Deer. It is the state animal of Manipur.