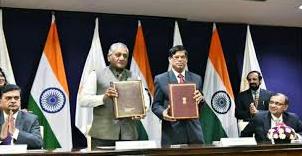 The agreement signed that provides ISA juridical personality an authority to contract, acquire and dispose- off movable and immovable properties and also to institute and defend legal proceedings.

Under the agreement, ISA will cater such privileges, applicable tax concessions and immunities that are necessary for ISA’s Headquarter to independently discharge its function and programmes.

The ISA will also derive its status, privileges and immunities as per Article 10 of Framework Agreement.

The ISA is an initiative jointly launched by the Prime Minister of India, Narendra Modi and President of France on 30 November 2015 at Paris in the presence of the secretary general of the UN, on the sidelines of COP21 UN Climate Change Conference.