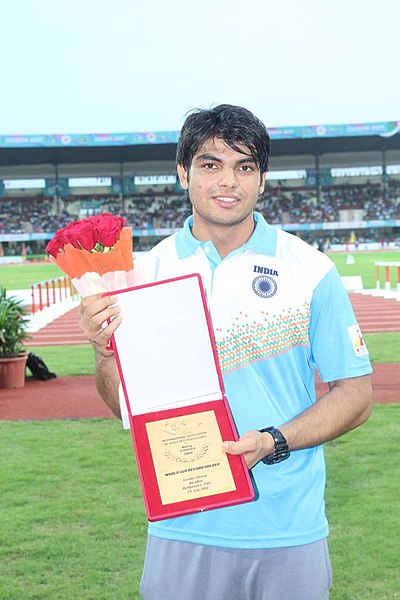 Subedar Neeraj Chopra VSM is an Indian javelin thrower who is the first track and field athlete to win an Olympic gold medal and U-20 World Championship for India.

At the age of 12, he was obese, weighing 90 kilos, causing local lads to tease him about the appearance, saying he resembled the popular image of a Sarpanch(village leader).

There was a javelin thrower named Jaiveer Singh who recognized his talent early talent at javelin throw after observing his ability to achieve a 40-meter throw without training which impressed Jaiveer about Chopra’s drive and he began to coach him.

After training with his first coach Jaiveer for a year, Chopra was admitted to the Tau Devi Lal Sports Complex in Panchkula under the training of Naseem Ahmad.

Neeraj Chopra won so many medals after his career started, it was his boom period in his career life.

Chopra is the son of Satish Kumar, a farmer who belongs to a Punjabi Khatri caste, and Saroj Devi, a housewife.

He has two sisters.

He graduated from Dayanand Anglo-Vedic College in Chandigarh and is currently pursuing a Bachelor of Arts from Lovely Professional University in Jalandhar, Punjab.