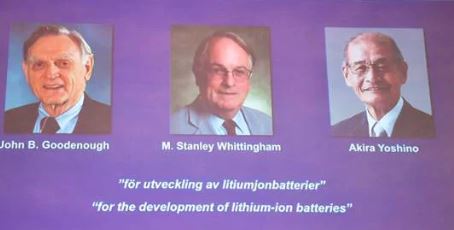 The Nobel Prize 2019 in Chemistry has been awarded to John B Goodenough, M Stanley Whittingham and Akira Yoshino..

All three scientists were awarded Nobel Prize 2019 in chemistry for the development of lithium-ion batteries which created the right conditions for a wireless and fossil-fuel-free society.

The Nobel Prize in Chemistry is awarded annually by the Royal Swedish Academy of Sciences to scientists in the various fields of chemistry. It was first awarded in 1901.

The foundation of the lithium-ion batteries was laid by Stanley Whittingham in the 1970s, during the oil crisis.

Stanley Whittingham started developing methods that could lead to fossil-fuel-free energy technologies. The battery’s anode — the point where current flows in from outside was made of metallic lithium, which is reactive. The batteries, therefore, were too explosive to be viable.

John B Goodenough worked on this and demonstrated that cobalt oxide with intercalated lithium ions can produce as much as four volts.

Japanese Chemist Akira Yoshino later created the first commercially viable batteries in 1985. He replaced pure lithium with lithium ions, which are safer and made the batter workable.