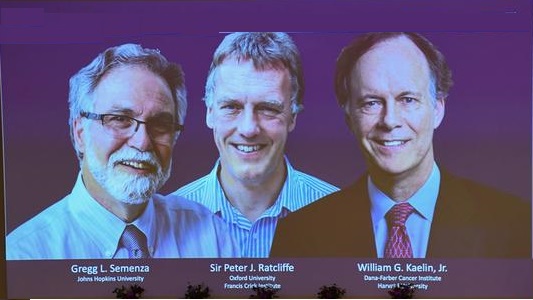 Nobel Prize in Medicine 2019 winners was awarded for their work in discovering how cells adapt to varying oxygen levels.

Nobel Prize in Medicine 2019 winners had discovered how the cells can sense and adapt to changing oxygen availability. They had identified molecular machinery that regulates the activity of genes in response to varying oxygen levels.

The discoveries revealed the mechanism for one of life’s most essential adaptive processes. They established the foundation of understanding how oxygen levels affect cellular metabolism and physiological function.

Though the fundamental importance of oxygen has been relayed for centuries, how cells adapt to changes in levels of oxygen has remained unknown. Oxygen is essential to convert food into energy.

About Nobel Prize in Medicine 2019 Winners

1. William G Kaelin Jr is a professor of medicine at Harvard University and the Dana-Farber Cancer Institute. He has been an investigator at the Howard Hughes Medical Institute, based in Maryland, since 1998.

3. Gregg L Semenza became a full professor at Johns Hopkins University in 1999. In 2003, he had appointed as the director of the Vascular Research Program at the Johns Hopkins Institute for Cell Engineering.