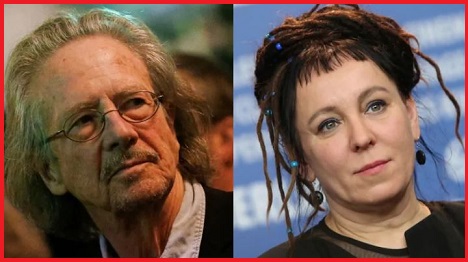 Nobel Prize 2019 in Literature was awarded to Austrian author Peter Handke and for the year 2019 awarded to Polish author Olga Tokarczuk.

The Nobel Prize in Literature has been awarded 110 times since 1901.

Peter Handke has won several awards like the International Ibsen award in 2014, Mulheimer Dramatikerpreis in 2012, Fraz Kafka PRize in 2009, etc.

Peter Handke has also collaborated with directors and written scripts for movies like The Goalkeeper’s Fear of the Penalty, the wrong move, the left-handed woman, the absence, etc.

Olga Tokarczuk was born is a Polish writer, activist and public intellectual. She is a trained psychologist from the University of Warsaw.

Olga Tokarczuk has published poems, novels. Her books “Flights” won the Nike award. Nike Award is considered one of the top literary prizes of Poland.

Olga Tokarczuk had also won the German-Polish International Bridge prie for her accomplishments in the promotion of peace and democratic development among the Europeans in different nations.