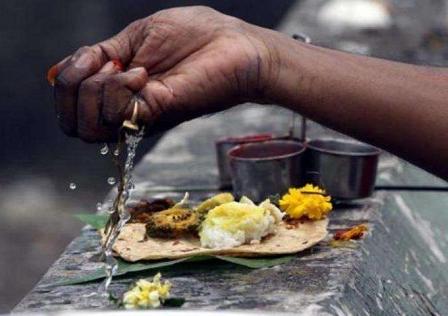 Pitru Paksha is a sixteen day period in which Hindus honor and give respect to their ancestors.

During this time period – which begins on the first Purnima (full moon) following Ganesh Chaturthi and ends on Peddala Amavasya – allows participants to not only honor those from their direct biological lineage, but also those who have contributed to their spiritual, moral and/or their intellectual development either in this life or during previous lives.

These individuals can be family, friends, mentors, teachers or anyone else who has touched their lives in a meaningful way.

During this time, the ritual of Shraddha is performed.

This specifics of this ritual may be different from person to person, but usually, it combines three components.

The first part is Pindadan, the offering of Pinda to the ancestors.

Pinda are rice balls that are usually made of goat’s milk, ghee, sugar, rice, honey and sometimes barley.

The second part of the ceremony is Tarpan, the offering of water mixed with kusha grass, barley, flour and black sesame.

The final part of the ceremony is Feeding the Brahmin. This is giving food to the Brahmin priests. Also during this time, it is considered auspicious to read from the Holy Scriptures.

However, there are also some things that must be avoided during Pitru Paksha. Participants are supposed to avoid engaging in new endeavors; eating non-vegetarian foods; shaving or getting haircuts; eating onions, garlic or eating junk food.

Hindu Religion: Annapurna Jayanti the full moon of the ...

The birthday of Lord Ganesha and celebrations   G...

Famous temples in India which have been built thousands of y...