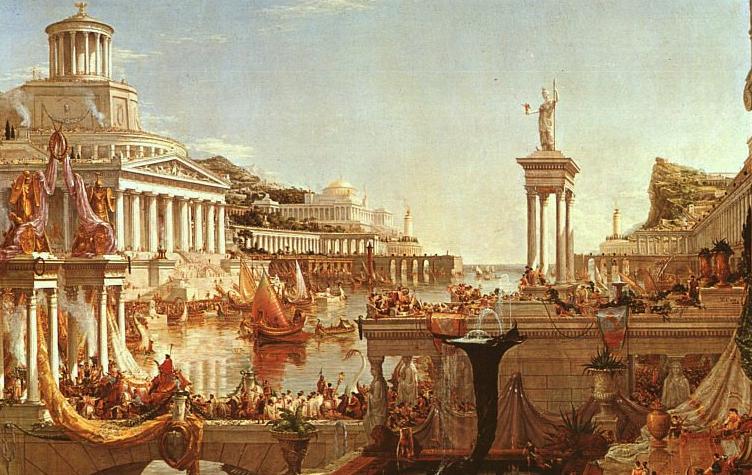 The great Roman Empire, the Catholic church and governance

From 2nd century BC to the 5th century AD, the towns of Europe and the Middle East were ruled by the Roman Empire. At its zenith, the Roman empire spread in east up to Greece, Turkey, Syria, Mesopotamia and Persia; in south up to include the Africa, North of the Sahara from Egypt to the Atlantic; in north and west of Europe within its borders the Danube and the Rhine, and included Great Britain south of Scotland Hadrian’s Wall.

As Rome grew in size and population, the rulers of Rome became very corrupt. Rather than serving the interests of the Empire, rulers, generals, and politicians became more concerned with protecting themselves. Civil wars between groups waged, taxes increased, and inflation soared. To stem the forces of history, the empire was divided in two {East and West} by Diocletian.

The Eastern Empire was able to thrive, but western was susceptible to invasion and ruin. This ruin came in the form of invasions of nomadic tribes (including Visigoths, Ostrogoths, Franks, Anglo-Saxons etc) from the North. The once great Roman empire vanished by the dawn of the 5th century.

In the eighth century, there were serious attempts to re-establish the grandeur of the fallen Roman Empire. At that time, the Roman Catholic Church was the only stable and unifying institution that survived since the old Roman Days. It was able to dominate the lifestyle of the day and claimed superiority over all political establishments.

The Church started imposing and deposing the emperors and thus became superior to kings. A complex relation between Church and State was established which continued for almost one thousand years.

Kessler syndrome ksp and its relation to Orbital debris

Kessler syndrome ksp and its relation to Orbital debris The...

What is AIDS (Acquired Immuno Deficiency Syndrome)? A ...

Coronavirus (MERS-Cov) details and its effects on organ...