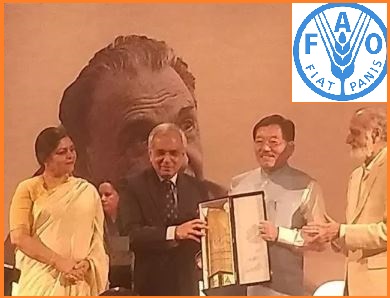 Sikkim achieved the feat by leaving behind other 51 nominees from around the world for the award.

Policies from Brazil, Denmark and Quito (Ecuador) were granted with jointly Silver Awards.

Sikkim is the first organic state in the world and all farmlands in the state are certified organic. State’s policy approach reaches beyond organic production and has proven transformational for its citizens. It has successfully upscale agroecology.

Future Policy Gold Award is nicknamed the “Oscar for best policies”. Earlier, was honored for policies combating desertification, violence against women and girls, nuclear weapons and pollution of the oceans.

Future Policy Gold Award-2018 was based on the central focus of agroecology policies and was co-organised by FAO, World Future Council (WFC) and IFOAM-Organics International.

FAO is a specialized agency of UN that leads international efforts to defeat hunger. Its parent organization is UN Economic and Social Council (ECOSOC).

Members:  194 member states, along with the European Union (Member Organization)