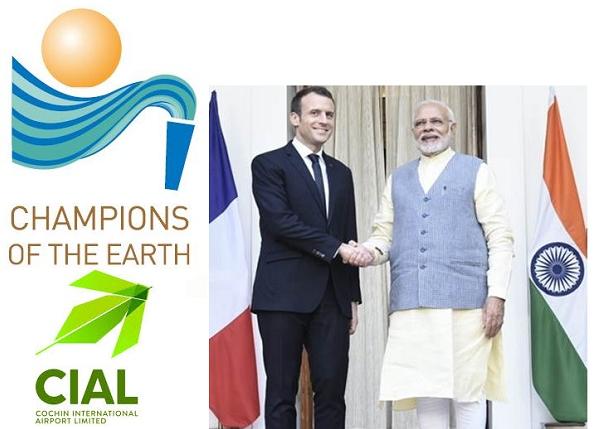 India has been honoured with this award as well as France as both countries have started the International Solar Coalition with equal efforts.

Narendra Modi and Emmanuel Macron were awarded this award under the 'Policy Leadership' category for pioneering and enthusiastic actions related to the International Solar Coalition and to promote new areas of cooperation in environmental work.

The prime minister was pledged to take a pledge to end the use of plastic in India by 2022 and the Immanuel Macro was given a global agreement for the environment.

Nation heads of both countries have spread awareness about this around the world and have successfully encouraged other countries to join the solar alliance.

Another honour for India is the fact that Kochi International Airport of Kerala has also been given the award for showing an entrepreneurial vision while moving forward towards renewable energy.

Kochi International Airport gives the message to the world that without leading the environment, it can also play a leading role in global development.

During this time it was said that the speed of society continues to increase, in this way the world's first full solar-powered airport is proof that Green Business is a good business.

Kochi International Airport was awarded 'Leadership in the use of renewable energy'.

Latest Champions Of The Earth Updates

About UN Champions of the Earth Prize Award: Details, History

About UN Champions of the Earth Prize Award: Details, Histor...