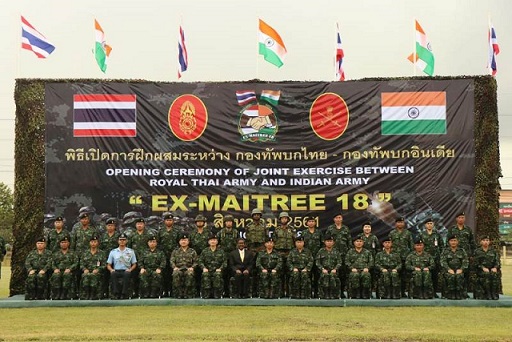 The ‘Maitree 2018’ joint military exercise contributed extremely in developing mutual understanding and bonhomie between armies of India-Thailand in order to counter terrorism.

Maitree 2018 military exercise is a platoon level exercise that comprises of infantry component. Its opening ceremony was started with the familiarisation of organisation and display of weapons and equipment of both the armies.

Maitree 2018 military exercise lay due emphasis on increasing interoperability between forces from both countries which is considered crucial for success of any joint operation.

India & Thailand armies also jointly trained planned and executed series of well-developed tactical drills for neutralization of likely threats that may be encountered in urban warfare scenario. Besides, experts from both sides also held detailed discussions to share their experience on varied topics for mutual benefit.