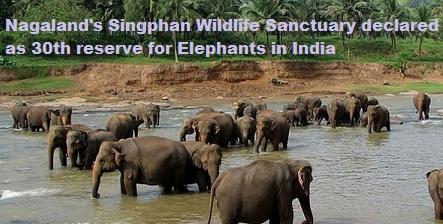 The Nagaland government has declared the Singphan Wildlife Sanctuary as an elephant reserve making it the 30th reserve for Elephants in India.

The Singphan Elephant Reserve is located in Mon district of Nagaland and spreads over an area of 5825 acres (2357 hectares).

The Singphan Elephant Reserve is located at about 65 km from Mon, the district capital town of the state.

The declaration of the Singphan Elephant Reserve in Nagaland will boost the elephant conservation in the country, especially the north-eastern region.

As per recent census report (2017), Nagaland has the population of around 446 elephants. The creation of new reserve will also result in protection and conservation of the elephant population and also ensure that this population remains healthy and viable.

Platinum Jubilee Commemoration of the Battle of Kangla Tongb...