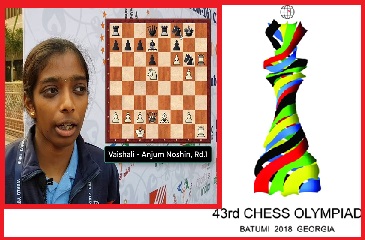 Indian bind chess player Vaishali Narendra Salavkar will become the first Indian female to be part of the International Braille Chess Association (IBCA) team at the world chess Olympiad that will be held in Batumi, Georgia.

IBCA which is affiliated to FIDE (World Chess Federation) sends its teams to participate at the chess Olympiad.

Vaishali Narendra Salavkar is 45 years old, hails from Maharashtra. She is an eight-time national champion. She has an Elo rating of 1,357 points.

A total of 7 Indian women chess players are participating in the world chess Olympiad.

Malika Handa is participating as part of the International Chess Committee of Deaf (ICCD) team.

Type: An apex body of chess for the blind and visually impaired