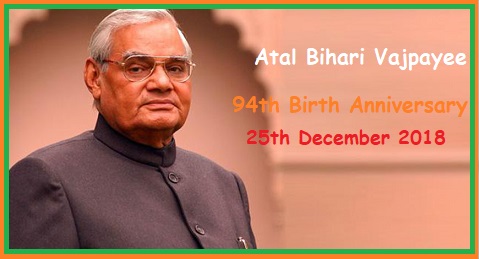 A memorial of Atal Bihari Vajpayee was dedicated to the nation on his birth anniversary at Rashtriya Smriti Sthal. It was constructed by the Centre Public Works Department (CPWD) at a cost of Rs. 10.51 crores. This project was funded by the Atal Smriti Nyas Society.

The function witnessed the presence of President Ram Nath Kovind, Prime Minister Narendra Modi, Minister among many other prominent BJP leaders and politicians/delegates.

Atal Bihari Vajpayee was born on 25th December 1924 in Gwalior, Madhya Pradesh. He was amongst founder members of erstwhile Bharatiya Jana Sangh (and was its president in 1968 upon the death of Deendayal Upadhyaya) which later became known as Bharatiya Janata Party (BJP).

Some of his pet projects launched during his tenure as PM were National Highway Development Project (Golden Quadrilateral) and Pradhan Mantri Gram Sadak Yojana, Sarva Shiksha Abhiyan. In 2009, he had retired from active politics due to health concerns.

Atal Bihari Vajpayee was honored with several prestigious awards throughout his career and life time.

About Atal Ranking of Institutions on Innovation Achievement...