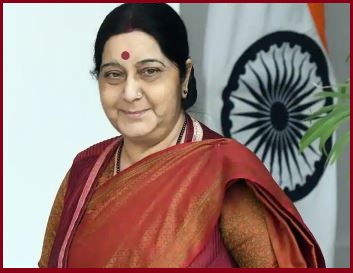 Sushma Swaraj is an Indian politician and a former Supreme Court lawyer. She served as a senior leader of the Bharatiya Janata Party (BJP) in the Rajya Sabha.

At present, Sushma Swaraj is serving as the Minister of External Affairs of India since 26 May 2014; she is the second woman to hold the office, after Indira Gandhi.

At the age of 25 in 1977,  Sushma Swaraj became the youngest cabinet minister of north Indian state of Haryana. She also served as 5th Chief Minister of Delhi from 13 October 1998 to 3 December 1998.

Sushma Swaraj was born on 14 February 1952 (age 66) at Ambala Cantonment, Haryana in India. She was educated at Sanatan Dharma College in Ambala Cantonment and earned a bachelor's degree with majors in Sanskrit and Political Science. She studied law at Punjab University, Chandigarh. She is married to Swaraj Kaushal and has one daughter.

Sushma Swaraj started her career by practicing as an advocate in the Supreme Court of India in 1973.

Sushma Swaraj was given the Best Speaker award by the Haryana State Assembly.

Sushma Swaraj received the Best Parliamentarian award twice in the years 2008 and 2010. She is the first-ever and the only woman MP to receive the Outstanding Parliamentarian Award.

» India & France agree to boost ties for fighting terrorism together