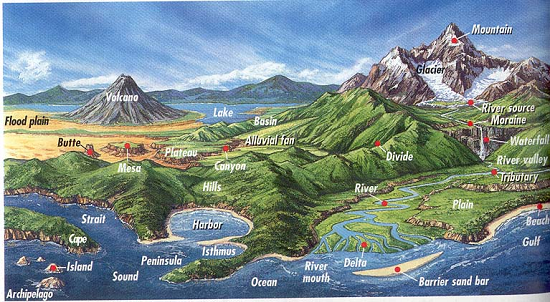 Geography: Four major types of Landforms in India and feature of earth's surface

Landforms of terrestrial features on the earth’s surface formed by the process of volcanic activity, movement of tectonic plates, sediment deposition, water, and air erosion. The highest landform is Mount Everest on Earth, which measures 8,850 meters above sea level, and deepest landform is Mariana Trench, which is about 10,916 meters deep.

Himalayas - The Himalaya Mountains serves as the northern boundary of India; some of the mountains and many nearby foothills are within the country.

Ganges River - The Ganges River runs 1,560 miles, which starts in the Himalayas and flows into the Bay of Bengal. The river flows through Uttar Pradesh, Bihar, and West Bengal. On merger with the Brahmaputra and Meghna rivers, it forms a river delta which is 200 miles away.

Thar Desert - In western India, the Thar Desert is the seventh-largest desert in the world, of which approximately 92,200 square miles are included. With very severe temperatures, the Thar is one of the most obsolete parts of the country.

Winter temperatures are regularly around freezing, and the temperature of the summer can surge to more than 120 degrees Fahrenheit.

» Biology: Criteria for essentially of an element and Quantitative Requirements