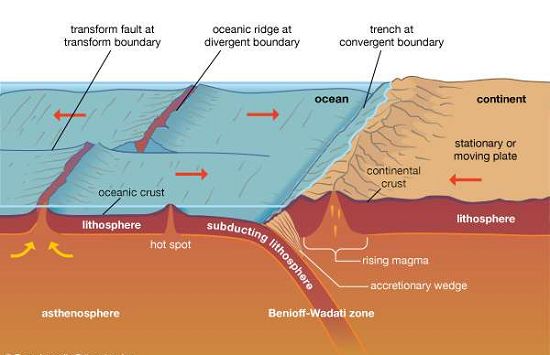 The lithosphere is divided into 7 major plates which are floating on a weak asthenosphere. Since these plates are constantly moving, at some places they are moving towards each other and other places they are drifting away from each other.

So, if they are moving away from each other beneath an ocean then this gives rise to the hot mantle material to come upon the sea surface and spread on the surface. This process is referred to as the seafloor spreading.

This type of plate movement is also called divergent plate movement. If the plates are drifting away from each other below the continents then this process can eventually result in the formation of rift systems.E example- East African rift valley system.

However, seafloor spreading is responsible for the creation of the new seafloor and ultimately new minerals too.

At one time all four plates touched each other and shared a mountain chain, parts of which still exist in the Appalachian and Atlas Mountains.

The mid-Atlantic ridge, or rift, depending upon who you ask, formed over hundreds of millions of years.