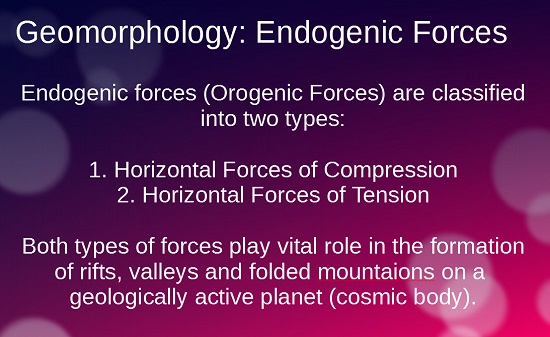 The comparison between forces of compression and the forces of Tension listed under Endogenic forces (Orogenic Forces) in geological activity on a planet. Such endogenic forces are found to be present on all geologically active planets with an active core in their center.

The intense amount of energy getting generated from rotation and gravitation effect goes working horizontally crafting rifts and valleys, folded mountains under instance circumstances. Below are the details about Endogenic Forces (Orogenic) of compression and Tension.

Forces of compression are found at geographical places where the horizontal endogenic forces push rock strata against a hard plane from one side or from both sides.

Endogenic Horizontal compressional forces lead to the bending of rock layers and thus lead to the formation of the Fold Mountains.

Endogenic horizontal forces are behind the most of the great mountain chains of the world like the Himalayas, the Rockies (North America), the Andes (South America), the Alps (Europe), etc.

Endogenic Forces of tension work horizontally (Orogenic) but in opposite directions.

Under the operation of intense endogenic tensional forces, the rock stratum gets broken or fractured which results in the formation of cracks and fractures in the upper crust of the planet earth.

The result of intense endogenic tensional forces turns into the displacement of rock upward or downward from their original position. Such a fracture in the upper crust is termed as faulting.

The line along which displacement of the fractured rock strata takes place is called the fault line.

A rift valley is formed by the sinking of rock strata lying between two almost parallel faults. (E.g. Valley of Nile, the East African Rift, the Baikal Rift Zone, Rift valley of Narmada and Tapti)

Rift valleys with steep parallel walls along the fault are called Graben and the uplifted landmass with steep slopes on both sides is called Horst. These are those low land regions where tectonic plates become highly active.

The very steep slope in a continuous line along a fault is termed as Escarpment.

There are extraterrestrial rift valleys found to be present on the planet Mars and Venus following geological processes happening on these planets.