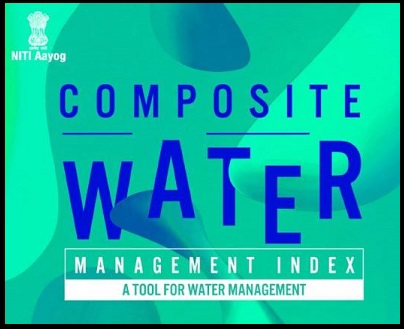 NITI Aayog released a report on the 2.0 Composite Water Management Index (CWMI 2.0) in which Gujarat topped for the year  2017-18.

CWMI report shows on an average, 80% of states assessed on CWMI 2.0 over e last three years have improved their water management scores, with an average improvement of +5.2 points.

In North-Eastern and the Himalayan States: Himachal Pradesh was adjudged number 1 in 2017-18 followed by Uttarakhand, Tripura and Assam.

Union Territories: They have for the first time submitted their data. Puducherry was declared as the top ranker.

Incremental change in index (over 2016-17 level): Haryana holds number one position in general States and Uttarakhand ranks at first position amongst North Eastern and the Himalayan States.

Composite Water Management Index (CWMI) was launched by NITI Aayog in 2018 as an important tool to assess and improve the performance of States/ UTs in the efficient management of water resources.

CWMI aims to instill a sense of cooperative and competitive federalism among the states. It first ever attempts at of creating a pan-India set of metrics that measured different dimensions of water management and use across the lifecycle of water.

In Gujarat, Tata Power Renewable Energy has completed a 100 ...

Harappa period site from Gujarat, Dholavira gets listed in W...

Gujarat Shops and Establishments (Regulation of Employment a...

» World Air Quality Report 2018: India's 7 Cities As Most Polluted In The World