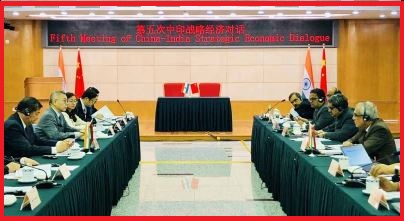 India and China 9th Annual Defence and Security Dialogue held in Beijing, China. It was a two-day dialogue that was held from 15 November to 16th November 2018.

It held between the two defence delegations headed by defence secretary Sanjay Mitra accompanied by senior officials of Ministry of Defence and Indian Army, Navy and Air Force.and China’s deputy chief of Joint Staff Department of the Central Military Commission.

India and China sides agreed to enhance exchanges and interactions through reciprocal high-level visits between two ministries of defence as well as between military commands, joint training exercises, mutual visits by defence personnel including mid-level and cadet officers were also agreed upon

They underlined the importance of this dialogue as an important mechanism between two countries for consultations on defence and security matters. They emphasised the need to further strengthen military-to-military ties in order to strengthen political and strategic mutual trust between the two countries.

Both sides also had an exchange of views on regional and global issues. Both sides agreed to hold the next round of the dialogue at a mutually convenient time in India in 2019.

9th Annual Defence and Security Dialogue was held after a one-year gap due to Doklam standoff. It had not taken place last year following the 73-day tense standoff between two Indian and Chinese militaries at Doklam.

FDI: India pips China in FDI inflows for the first time in 20 years

FDI: India pips China in FDI inflows for the first time in 2...

India and China Sign Protocol for export of fish meal & ...

» India and Tajikistan Presidents join hands to fight against terrorism