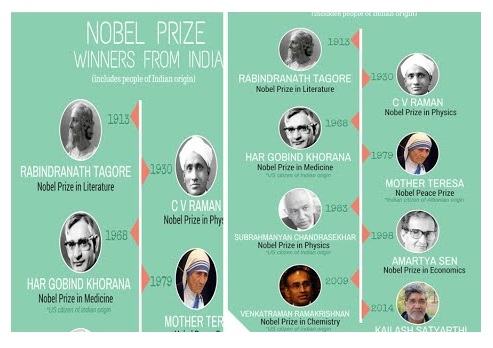 1. Rabindranath Tagore-1913, India’s popular poet and writer. He was awarded Nobel Prize for Literature in 1913 for his “Geetanjali” a collection of his poems.

3. Dr. Hargobind Khorana-1968, India’s Doctorate in Chemistry was awarded Nobel Prize for Medicine in 1968 for his study of the Human Genetic Code and its role in Protein Synthesis.

4. Mother Teresa-1979, a Yugoslavian nun who became an Indian citizen. She was awarded the Nobel Prize for Peace in 1979, for her service through her Charitable Mission

5. Dr.Subramanian Chandrashekar-1983, an Indian Astro-Physicist was awarded Nobel Prize for Physics in 1983 for his theory on white dwarf stars’ limitation known as ‘Chandrasekhar Limit’. Dr.Subramaniyan is the son of the elder brother of the ‘Nobel Prize Winner’-Sir C.V.Raman.

6. Dr.Amatya Sen-1998, an Indian Professor in Economics was awarded Nobel Prize for Economics in 1998 for his work in Economic

7. Dr.Venkataraman Ramakrishnan-2009, an Indo-American has shared Nobel Prize for Chemistry for the year 2009, along with a co-American Thomas Steitz and Ada Yonath of Israel

8. Mr. Kailash Satyarthi -2014, an Indian Children’s rights activist had been awarded the “Nobel Prize For Peace” for the year 2014, jointly with Ms.Malala Yousafzai of Pakistan