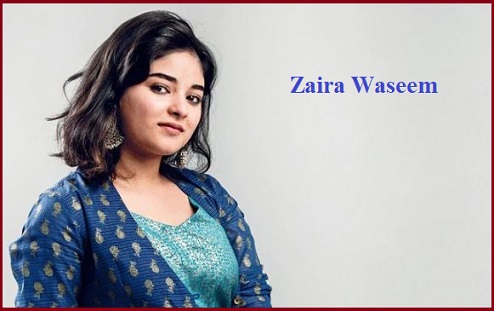 Bollywood Actress Zaira Wasim has taken retirement from acting at a very early age citing Religious issues on 30th June 2019, the time when her career was just started.

Zaira Wasim (18-years-old) was born on 23rd October 2000 to a Muslim family in Kashmir, India to Zahid and Zarqa Wasim. Her father works as an Executive Manager in Srinagar and her mother is a teacher.

Zaira Wasim completed 10th standard from St. Paul's International Academy in Sonwar Bagh, Srinagar scoring above 90% of marks in her Board examinations. She is currently studying in 12th-standard student in the Humanities stream in Jammu’s Heritage School affiliated to CBSE.

Zaira Wasim started her career with blockbuster Hindi movie 'Dangal' (2019) playing role of Geeta Phogat (Indian Wrestler), the movie claimed over Rs 2000 crores at the box office around the world. Later, she appeared in 'Secret Superstar' (2017) Hindi movie which was also a hit.

Zaira Wassim was also honored with National Child Award for Exceptional Achievement by the President of India, Ram Nath Kovind at a ceremony in New Delhi in 2017.

Neeraja Bhanot was an Indian model and purser for the airlin...