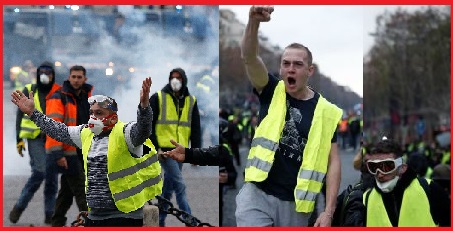 The Yellow Vests movement or Yellow Jacket movement is a protest movement which was started with a petition posted in May 2018, against arising of fuel prices (diesel) in France.

The Yellow Vests movement first took action for the first time on 17th November 2018, on the day of Saturday. It saw a massive echo in French cities and rural areas.

The "yellow vest" was chosen as a symbol because all motorists had been required by law—since 2008—to have high-visibility vests in their vehicles when driving. As a result, reflective vests have become widely available, inexpensive, and symbolic.

The Yellow Vest movement has inspired imitation across Europe, particularly in Italy, Belgium and the Netherlands.

Diesel prices in France have increased by 16% in 2018, with taxes on both petrol and diesel increasing at the same time and a further tax increase planned in 2019.

This hike in fuel price results to an increased tax on petroleum products, the dispute has been expanding to other issues regarding the purchasing power of the middle classes especially in rural and peri-urban areas resulting in an urge for the resignation of the President of France, Emmanuel Macron.

So far, 412 people are arrested in Paris, 133 injured in Paris and now the France Government is considering to imply emergency in the state.