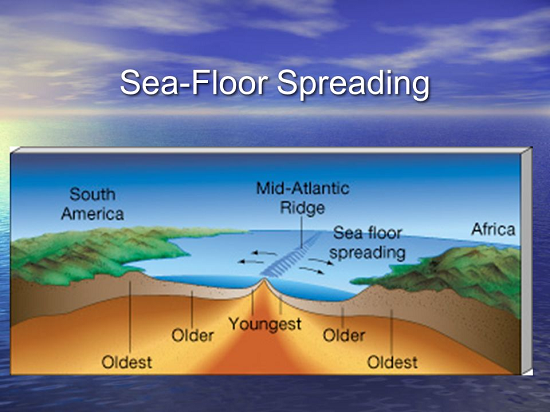 The idea that the seafloor itself move as it expands from a central axis was proposed by Harry Hess.

Seafloor spreading is a geologic process where there is a gradual addition of new oceanic crust in the ocean floor through a volcanic activity while moving the older rocks away from the mid-oceanic ridge.

The mid-ocean ridge is where the seafloor spreading occurs, in which tectonic plates—large slabs of Earth’s Lithosphere—split apart from each other.

Seafloor spreading was proposed by an American geophysicist, Harry H. Hess in 1960. By the use of the sonar, Hess was able to map the ocean floor and discovered the mid-Atlantic ridge (mid-ocean ridge).

He also found out that the temperature near to the mid-Atlantic ridge was warmer than the surface away from it. He believed that the high temperature was due to the magma that leaked out from the ridge. The Continental Drift Theory of Alfred Wegener in