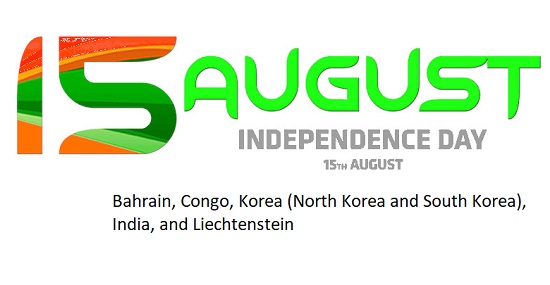 India - India got its freedom from the nearly 200-year-long British rule on August 15, 1947. Following the Indian freedom struggle, Before leaving India, the British divided India into two independent states on the basis of religion - Hindu-majority India and Muslim-majority Pakistan. T

Bahrain - Bahrain got its Independence from the British Rule on August 15, 1971, following a UN survey of the Bahraini population. Bahraini Population and the British went on to sign a friendship treaty.

'National Liberation Day of Korea' refers to August 15, 1945, is the only common public holiday celebrated by North Korea and South Korea.

On this day the US and Soviet Forces ended the Japanese occupation of the Korean Peninsula. The day is also called Gwangbokjeol (meaning Time of the Restoration of Light). Independent Korean governments of North Korea and South Korea were created three years later in 1948.

Liechtenstein - Liechtenstein is the world's sixth smallest nation. Liechtenstein marks its Independence Day on August 15 to commemorate its liberation from Germany's rule in 1866. On this day the general population interacts with the royal family of Liechtenstein.