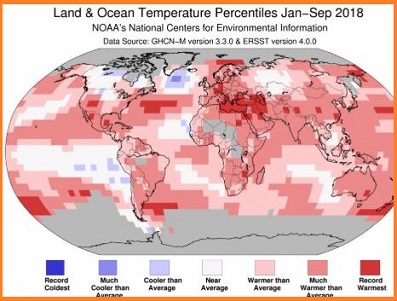 NASA & NOAA Report: 2018 Was The Fourth Warmest Year On Record

An independent analysis by NASA and the National Oceanic and Atmospheric Administration have found that earth's global surface temperatures in 2018 were the fourth warmest since 1880.

NASA, in a statement, said that the past five years were collectively the warmest years in the modern record. It found that 2018 global temperatures were 0.79 degrees Celsius above the 20th-century average.

Since the 1880s, the average global surface temperature has risen about one degree Celsius.

The "unprecedented" heat wave that burned its way through all of the country's melted roads, saw infrastructure fail and killed thousands of animals.