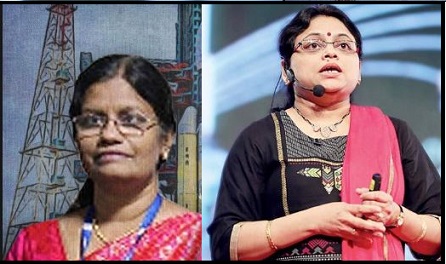 This is the first time in Indian history Chandrayaan-2, India’s second lunar mission is leading by two women scientists of Indian Space Research Organisation (ISRO). Muthayya Vanitha is leading the Chandryaan-2 and on the other hand, Ritu Karidhal is working as Mission Director.

Project Director and Mission Director both are women for Chandrayaan-2. Muthayya Vanitha is an electronics engineer, now responsible for the success and failure of Chandrayaan-2.

Muthayya Vanitha was heading telecomm and divisions in digital systems group in ISRO’s  Satellite Centre. This center is also known as UR Rao space center.

Muthayya Vanitha is also a project director of telemetry and telecomm and divisions in digital system group.

Muthayya Vanitha was also awarded as the best woman scientist in the year 2006.

Ritu Karidhal holds a master’s degree in the field of Aerospace Engineering from IISc.

Ritu Karidhal has been working with ISRO since 1997. She has received ISRO Young Scientist Award from former president APJ Abdul Kalam in 2007.